What is Blue light? Benefits and harmful effects of Blue light 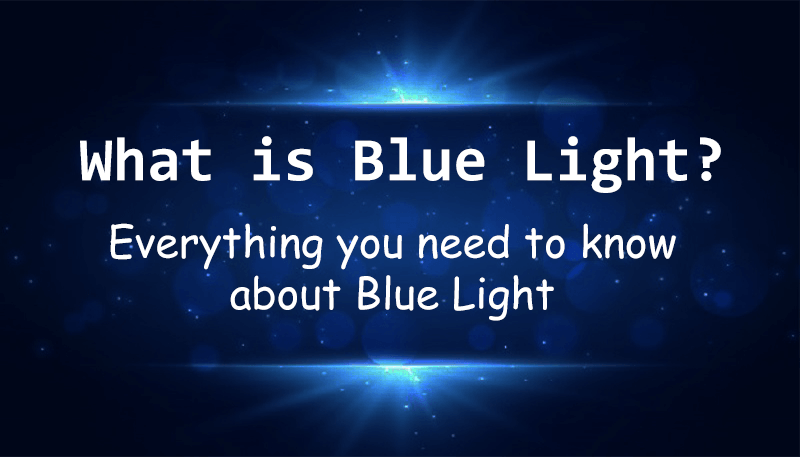 So, you are here because you are mostly concerned about Blue light. Or maybe you don’t know what blue light is or you are not sure is it good or bad.

There’s a lot of confusion about the blue light. People have gotten fearful not understanding what blue light really means. Simply, blue light is one of the colors in the visible light spectrum that can be seen by human eyes.

This article will focus mainly on blue light and the benefits and drawbacks related to it. Along with that, there will be discussions on how to mitigate the damage caused by the blue light.

What is Blue light?

Blue light is a type of high-energy visible light with very short wavelengths that produce a high amount of energy.

The technical explanation of what blue light is ‘any light that has blue colored wavelengths’.

Blue light can be found in many places throughout our busy day. This light is one of the several colors that can be found in the light produced by the sun. The color of light also contributes to the amount of energy it has, which is related to its wavelength.

Blue light has a wavelength of between approximately 380nm and 500nm. Light wavelengths are measured in nanometers (nm).

A fun fact to know: HEV light rays, that are part of the blue light spectrum, is what causes the sky to look blue to the human eye and brain.

This is because of the shorter wavelengths of the blue light spectrum, which scatters easier than other colors.

But, be aware of over exposure to blue light as it can be harmful to the eyes.

What is the source of blue light?

The sources of blue light in our daily lives are plentiful and everywhere you look, you will likely find one. The other likely sources are all man-made and are nearly unavoidable these days.

This man-made sources are,

These man-made blue light sources also include LED lights and LCD panels, which can be found on a wide range of electronic devices.

Since these types of indoor blue lights are being used for longer periods, their use can be beneficial and harmful depending on how you are looking at it.

What are the Benefits of blue light

Actually, Blue light mainly invented for the welfare of mankind. It is one of the most energy efficient and low-cost forms of light.

It also contributes to our mood and our circadian rhythm. So, the body knows to work on day time and fall asleep at night.

Blue light has medical uses like photodynamic therapy, which has several benefits for people with many health issues.

Below is a list of some of the benefits of blue light as a therapy:

Jaundice (hyperbilirubinemia) is a condition that is created when a yellow compound called bilirubin accumulates in the blood. This condition will normally clear up on its own. Blue light therapy has shown that it can be as successful as a therapy.

For people who suffer from Seasonal Depression or SAD, bright light therapy has shown to be effective. Therapy using blue light is a very effective way to treat this type of depression.

Blue light is considered an anti-inflammation treatment for psoriasis, acne, and keratosis. The blue light targets the t-cells (immune system cells), which can be found close to the surface of the skin.

Blue light has been shown to have a positive effect on acne since it is caused by inflammation due to bacteria being trapped in the sebaceous duct. This causes the skin to be red and inflamed.

People who suffer from excessive fatigue and daytime sleepiness have shown to be positively affected when treated to daily doses of blue-enriched white light.

Additional uses that are not fully proven:

The harmful effects of blue light

While there are numerous documented benefits of blue light, there are some well documented harmful effects on the body.

It is great for the daytime when the body needs to be alert. But, at night it can become a problem when the body is exposed only to the natural light of the sun.

Actually, there’s no scientific evidence that blue light from digital devices causes damage to our eyes. There’s a growing concern that blue light can have long term effects on our health.

Below we have included some of the most common harmful effects that have been reported. Medical professionals have discovered over time that it is important to be aware of the possible dangers:

The blue light harms the neuro pathway between the brain and the eyes. It is believed that the blue light’s wavelengths also increase the symptoms associated with headaches and migraines.

The body’s Circadian Rhythm or internal clock controls your body’s normal sleep pattern. When the body’s release of the sleep hormone is interrupted, it can essentially reset your body’s internal. This can make it extremely difficult to maintain a healthy amount of sleep.

Blue light has long been suspected as the culprit when it comes to people suffering from decreased daytime alertness. Much of this is linked to excessive exposure to blue light at night before bedtime.

How Does Blue Light Affect the Eyes?

More research seems to be pointing to some very concerning issues that have been discovered about an excessive amount of exposure to blue light. The reason for why this is important is that many people may not even realize that they could be harming themselves.

Our eye’s natural filters don’t provide sufficient protection against blue light rays. UV light is filtered mostly by the cornea. But blue light can pass through the cornea and hit the retina.

We have come up with several ways that blue light can be harmful to people, despite the positive effects:

According to several new studies, the exposure to blue light from cellphones, tablets, and computer screens can lead to blindness.

The researchers have discovered that during their research, a specific molecule in the eye turns toxic by being exposed to blue light. This toxicity inevitably will lead to loss of eyesight for millions of people.

The sheer of the blue light makes it more difficult for the eye to block the harmful rays of blue light as it is made up of shorter wavelength and higher amounts of energy.

This means that blue light tends to do more damage. The major problem is that the less focused energy tends to reduce the contrast. In turn, the images being produced leads to an excessive amount of digital eye strain.

The more that your eyes are exposed to blue light, the higher the risk you are to suffer from macular degeneration. While this is commonly thought to be caused by ageing, many people who suffered from it are elderly.

However, younger people are exposed to prolonged periods of blue light from computer screens, cellphone screens and video games. The rays of blue light can easily pass through the eye and cause damage to the retina. This can have the same effect on your vision as Macular Degeneration.

Blue light is not easily blocked from reaching the retina

When the rays of blue light pass through the eye, it has a devastating effect on the retina. These blue light rays can damage the photoreceptor in the retina, which can lead to eventual blindness.

What Can You Do to Protect Your Eyes from Blue Light?

The blue light exposure comes from the screen of your mobile devices; cellphone, tablet, or e-reader. You can only eliminate the exposure by putting your device away.

However, there are some things that you can do to lower the amount of exposure to this harmful blue light.

We have produced a list of ways to protect your eyes from the exposure of blue light:

Changing the angle of your device

The blue light comes straight off the screen, therefore if you angle the screen 30 degrees away, fewer rays hit your eyes. This should immediately help with any eye strain issues.

Get a pair of blue light blocking glasses

By a screen filter

Use a screen filter that fits over the top of your screen on your phone, tablet, or a laptop. This is important for children who might be using these devices for long periods.

There are software plugins that you can download, which adjust your screen light settings to help block the blue light.

Change the screen setting of your device

Many new devices offer a “comfort view” setting as an option, which can help to reduce the contrast. This will help to balance the difference between the light on the screen and the surrounding light.

If you need to use an electronic device for a long time, apply this 20-20-20- rule. Take a 20 second break in every 20 minutes and focus your eyes on something that at least 20 feet away. This will reduce the stress on your eyes.

Blue light is seemingly everywhere; there are positive and negative effects of this. This means that to strike a balance between good and evil, you need to understand what part of it is evil. The main negative effect caused by the energy of blue light is focused heavily on the eyes.

The powerful short wavelengths of blue light can penetrate the eyes and cause reparable harm to the retinas. It can cause macular degeneration and eventually lead to blindness. The blue light, that is of most concern, is produced from the electronic devices like cellphones, tablets, and laptops.

Using a filtering device like glasses and screen coverings can help to reduce or virtually eliminate these harmful rays from getting to your eyes. 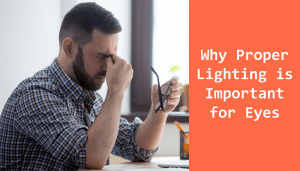 Why Proper Lighting is important for eyes